This blog was adapted for personal use and can be utilized by any student Golf as a referral as to how the grip works in golf swing. 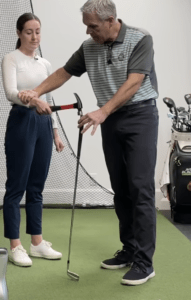 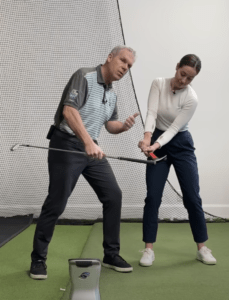 Examine how we use a hammer to drive a nail. Realize how the anatomy aligns with the direction of the blow. If you hit vertically downwards, the head and upper body will be right over the nail. The radius and the ulnar of the forearm will be in a stacked position on top of each other. The anatomical snuff box will be aligned with the free downward motion of the wrists and the base of the index finger will be on top of the shaft to support the downward motion.

If you hammer sideways, – imagine a nail in a door frame -, your entire anatomy will move to stay behind the blow and support the delivery of energy in the intended direction. The head and upper body tilt sideways. The radius and the ulnar of the forearm will still be stacked, now in the plane of
the blow. The anatomical snuff box and base of the index finger will remain aligned in that same target related plane. 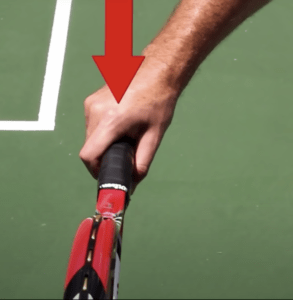 Notice that you grab the racket in a closed position to facilitate a strike with top spin. The racket is not brought into this position by a manipulation of the wrist, because the player wants to keep everything optimally aligned to delivery energy. Thus the wrist stays in the ’hammer’ orientation, while the racket is turned closed.

Bat With A Baseball 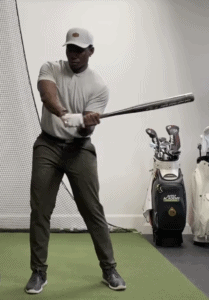 Hold the golf club just like you would hold a baseball bat be-cause this allows you to apply the maximum force. Again, the radius and ulnar are stacked in the plane of the hit direction. This may give the appearance of a cupped wrist at the top of the backswing. However, this is the anatomically correct position, because the wrist can hinge over the tabati ́ere anatomique ofboth hands. A cupped wrist position has the trail hand wrist flattened.

The orientation of the club face will determine how you feel the balance of the club in your hand. In a closed position the leading edge would appear in a picture in a horizontal position, in an open position the leading edge would point towards the ground. Thus, when you change you grip you will experience a difference in feel. Closing the club face moves the feel of the weight of the club head more unto your lead forearm. At the top of the backswing, the open position may feel more balanced and natural. This would be too open in relation to the target as the ball would be hit with that open face.

If you close the face about 45 degrees and swing it analogy to a base ball bat, you will see that the leading edge will be square to the path at impact. If your perceived task is to release the club to the target, the kinetic sequence will occur correctly. If the target is the ball, there will be no perceived need for a release towards a distant target and it will therefor not be performed.
We are releasing the club towards a target and are collecting the ball while we do so.

Just as much as a baseball players swings towards a target such as the fence at the end of the field; he will hit and compress the ball with the bat during that targeted motion. Hold the club in your lead hand with a grip that feels super tight and secure. When applying the trail hand, the index finger is placed correctly in a relation to the shaft that reminds you of holding a kitchen knife while pushing down on a cutting board

Extremely Important Is The Rotational Aspect.Extremely important is the rotational aspect of the release. Whether you apply a baseball swing or a tennis serve or a golf swing. Imagine to swing a golf club in a horizontally plane in front of you, letting forearms rotate naturally or ’turn over’ – the trail hand will turn over the lead hand.

The Movement Of The Hands And The
Direction Of Force 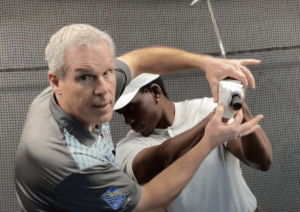 Apply this to a golf club. If your target is the ball right in front of you, the blow will be directed straight down and your grip and body position will reflect that movement. If you task ist the release of a baseball bat to a distant target somewhere in the field, your body as well as your forearms as well as your wrist will line up behind the direction of that blow to apply maximum directed energy in that direction.

The Grip Is Too Strong 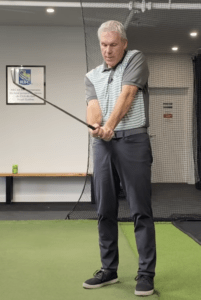 Now this is very important: if you bring the club face back to square with a twisting of your wirsts and tension in your forearms, you will notice that your body is still vertically upright, your radius and your ulnar are not stacked up and your tension, too strong 3 wrists can not move freely and conjunctly over the anatomical boxes. This is a too strong grip ! If you release and you relax from this position your club face will return too closed and you will hook the ball too much.

This will especially be the case if you release at the ball and not at the target. In a correctly alignment of the anatomy there will be a body tilt and no tension in the forearms. Early extension and casting both reflect a neutral grip and a release at the ball. 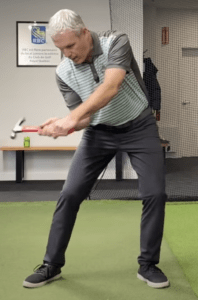 If you line up your anatomy ’behind’ your ’baseball’ blow with a specific distant target:

To facilitate the understanding: hold the club in front of you. Swing to hit an imaginary nail at chest height with the club face square. Hit the nail out of the park. There you go. Hit another nail at the side bottom of a door frame. Hit it out of the park as well. There is your golf swing.

For more awesome lessons such as this one click here for more important wisdom in golf.